TV antennas come in handy in aiding connection access to live events, shows, and even sports. They are known to operate in any environment or scenario, depending on the availability of sound signals.

However, recent research has proved that TV antennas work better at night. Thus, what’s the reason behind this phenomenon; why does it occur?

It’s because the reception is better at night than during the day. The improved reception is usually due to the absence of the sun, a notable source of radio noise. For the most part, TV signals can travel long distances during this time; that’s why more channels or stations may appear.

This article reveals the operating principle of TV antennas and describes the effect of different situations and factors.

You’ll understand how everything works and the justification behind seemingly common occurrences.

Why Does My TV Antenna Work Better at Night?

The reason is not far from an improved reception. The TV antenna has a better chance of capturing the signal at night because there is less interference.

With less interference, the TV antenna can capture and read more signals from a greater distance.

The occurrence is likewise attributed to the ionosphere, an atmosphere layer that makes extended transmission possible.

The ionosphere usually reflects transmissions, but at night, the reflection characteristic is quite different as there’s no sun.

This reflection makes it easier for antennas to pick up signals from satellites and TV stations.

Pragmatically, TV transmissions cannot travel so far in the daytime due to the earth’s curvature(the ionosphere is affected).

But as the curvature changes concerning the solar wind, transmissions can go higher. Additionally, especially regarding TV transmissions, you ought to be aware of atmospheric noise.

Atmospheric noise is the interference in radio waves caused by the earth’s atmosphere.

In other words, the atmosphere acts as a barrier to the transmission of radio waves, causing them to spread out and lose energy.

The amount of interference depends on the type of waves and how they interact with the atmosphere.

Fewer sources of interference at night when fewer people use radios and televisions.

By implication, TV signals can travel longer distances without being blocked or weakened by other signals.

Likewise, there are a lot of factors that affect the quality of TV transmission. Though not in all cases, weather conditions can be a substantial determinant.

For instance, if it’s raining or snowing, there’ll be interference from rain or snow particles on the ground.

Such conditions interfere with signals and other environmental factors like atmospheric pressure and temperature changes which can cause signal distortion.

Does the Time of the Day Affect Antenna Reception?

The time of the day can affect reception. Practically, the reception at night is, in most cases, better compared to sunrise.

Usually, in the daytime, most satellite transmitters are far away owing to the earth’s curvature, so the signal is too weak to be noticed.

But at night or sunset, the upper atmosphere cools off while the lower atmosphere is usually warm. By implication, there’s cold air above the ground and warm air beneath.

This occurrence, in turn, prompts the lower atmosphere to act as though it were a prism, causing wave transmission to bend towards the earth.

Consequently, antennas 60-90 miles away from the transmitters will detect the signal. There’ll likewise be an improved reception; moreover, the signal will be stronger.

It is a common misconception that the time of the day does not affect antenna reception. This is because electromagnetic waves are affected mainly by atmospheric changes.

Logically, an antenna would have better reception at night because more signals would be available due to improved signal strength.

However, note that many factors, such as weather conditions, can affect an antenna’s reception and signal strength.

Therefore, one cannot say with certainty that the time of day will always affect the quality of the received signal. Nevertheless, it occurs.

TV antennas are a vital part of any TV setup. They convey signals from broadcast towers, transmitting them to your TV set.

But unfortunately, this transmission process is not always a smooth one. Many factors make the TV antenna work better or worse for you.

A few include the distance between the antenna and the broadcast tower and the quality of the antenna.

#1. The Distance Between the Antenna and the Broadcast Tower

The closer you are to the broadcast tower, the stronger the signal will be, and as a result, the antenna will operate effectively.

On the other hand, the antenna might not work well if you live in an area with many high-rise buildings.

#2. The Quality of the Antenna

Typically, antennas with a higher gain pick up signals better than those with lower gains.

The reason is that they have more power and can work efficiently by amplifying weaker signals coming from far-away towers.

To your knowledge, passive antennas are pretty typical and not so strong to detect weak transmissions.

Subsequently, an antenna amplifier would be helpful if you’re missing channels that generally show up and are in the range.

Antenna amplifiers strengthen broadcast signals, allowing antennas to detect weaker signals. You’ll be able to tune into weaker channels; it may appear like new channels are coming up.

Furthermore, in wanting your TV antenna to work efficiently, you may want to perform specific modulations and change some settings.

In any event, be cautious of a few dos and don’ts.

Why Do I Lose My TV  Signal During the Day?

The signal from your TV might get lost for several reasons. The first one is that the TV signal transmission is too weak to be picked up by the antenna.

Especially during sunrise, transmitters are usually far from the antennas, thus making it challenging for the antenna to detect transmissions.

Another possibility is that the atmospheric conditions are poor, and there’s too much interference. This can happen when there’s a storm, it rains, or a led light interference is available.

Likewise, structures such as buildings, trees, and mountains that are large enough can obstruct the signals.

Asides from that, the sun can also disturb the transmission because it emits high-frequency waves that can interfere with transmissions from space.

The last possibility is that you are in an area with no TV transmitters broadcasting. By implication, you will not find any signal.

Subsequently, if you lose your TV signal, check and ensure that the antenna is facing the right direction.

You can do this by pointing it in different directions and seeing if you get better reception. If not, change the current location to a better one.

It could also be that your current antenna is too old and doesn’t pick up strong enough signals anymore, so it’s time for an upgrade! 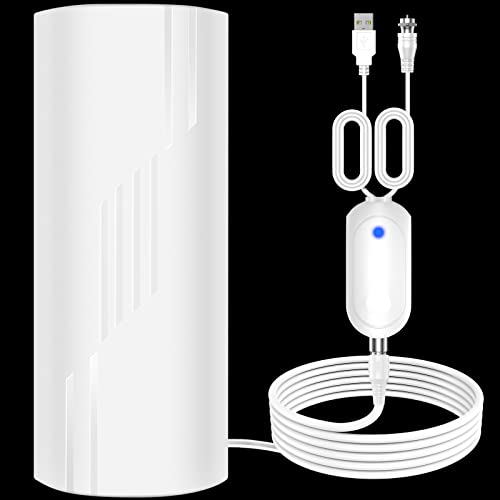 How Can I Make My Antenna Signal Stronger?

It’s important to note that the antenna signal is only as strong as the antenna itself. Thus, getting a good reception will be challenging if you’re in a weak signal location.

The first step in improving your antenna signal is moving closer to the broadcast tower.

This mobility may only be possible for some users, but ideally, it should be the first step if you are experiencing connectivity issues.

Another helpful tip is to get an amplifier for your antenna. An amplified TV antenna is typically helpful, especially in rural areas where the signal may not be solid.

It’ll help boost the signal and strengthen it before reaching the receiver. Additionally, inspect the antenna and see if it’s in a good location.

You can examine the signal by moving it from one position to another. Likewise, clean the antenna of any dirt or dust and ensure it’s in good condition(free of external damage).

#1. Why Does My TV Antenna Signal Fluctuate?

The most typical reason for the fluctuation is obstacles, such as tall buildings, cliffs, and even hills. Anytime the signal comes across such hindrances, it reflects off the structures.

#2. Do Trees Interfere With TV Antennae?

Tall structures generally interfere with antenna reception, so if the trees are all enough, of course, they will. It occurs such that they reflect the transmission signals.

#3. Where is the Best Place to Put an Indoor Antenna?

The best area to position your indoor antenna for an effective transmission is near a window. In this scenario, the broadcast towers will have a more visible line of vision.

A good antenna can help to improve reception. But the time of the day also plays a significant role, impacting the reception.

TV antennas operate better at night because transmissions can travel long distances during such periods, and there’s less interference. Consider getting an amplifier to strengthen your TV antenna signal more efficiently.