One common problem with people who use Samsung electric stoves is having the hot surface indicator red light staying on.

Many people have complained that the indicator light does not go off even after use and the stove is cold.

While this doesn’t affect the overall performance of the stove, you can’t tell when it is hot or cold. And can risk getting burned when it gets back on.

Why Does My Samsung Stove Hot Surface Indicator Light Not Go Off?

Each burner on a Samsung electric stove has a sensor attached to a control switch, and if there’s a fault on either the control switch or the sensor, the surface indicator light will remain on even when the stove is off.

The sensors do not control the hot surface burners themselves, but you can’t be sure when the stove is on or off, making it a risky situation to ignore.

#1. How do Electrical Sensors work?

Sensors on electrical stoves are configured to detect temperatures of certain degrees, which the gas oven requires, with a set limit of 450°F.

They are connected to the stove’s control switch and the surface indicator light, which shows if the stove is on or off.

Once the temperature exceeds the limit, the sensor sends a signal to the control switch, which turns it on or off depending on the situation.

By taking out each burner carefully and tracing the wires linking to the faulty sensor, it’ll be easier to replace.

#2. How does Control Switch work On a Samsung Stove Hot Surface? 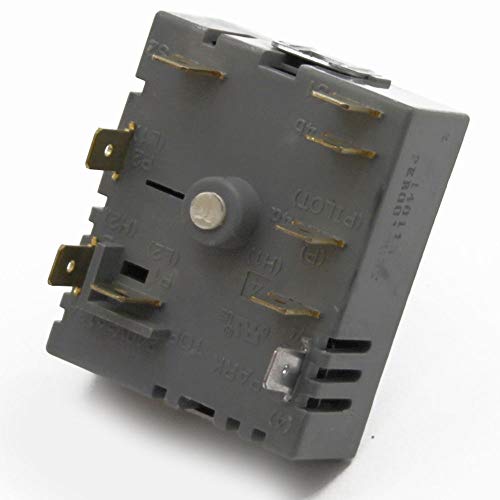 The control switch of an electric stove uses bi-metallic strips connected to the two terminals and a sensor.

The control switch serves as both the hot surface burner switch and a form of protective device for the oven to prevent it from overheating and damaging.

A damaged control switch is usually a result of a power surge or overuse. Many switches come with inbuilt fuses, preventing the switch from getting damaged.

The switch is exposed and can easily get damaged when the fuse is burnt.

Other times, the wires connecting the switch and the surface indicator light get burnt, and therefore, there’s no conduction. Lack of power entering the burners will cause it not to come on.

A short circuit occurs when a current diverts from one component to another. The reason why this happens is that the resistance in the components is relatively smaller than the required resistance.

This process happens when there’s contact between both components, one of which is of lower resistance.

Every electrical appliance is connected to a circuit breaker depending on the load rating of both the appliance and the breaker.

Electric stoves are usually connected to 15 amp range breakers which supply power to the stoves from the distribution board.

Before attempting any repair on appliances that are still connected, ensure to cut off the power supply from the breaker by switching it off.

This way, you could work without exposing yourself to electric shocks. But before putting off the breaker, take note of the surface indicator light that continuously stays on for easy tracing.

When it comes to electricity, it is always good to call an electrician for any repairs because of how dangerous electric shock can be.

Electrical faults like the one with surface indicator light do not necessarily need the presence of an expert to fix them.

You can rectify everything with basic knowledge about electricity and the working principle of the control switch.

No matter how little their power consumption is, all electrical appliances are connected to a circuit breaker on a distribution board.

The amp range of circuit breakers is between 10 and 15 amps for domestic purposes. The 15 amps range is the standard rating for devices that consume much power.

Depending on the power consumption, all devices are connected to a circuit breaker which serves as both the control switch for the device and a protective device.

It protects the appliance and other circuit breakers by tripping off whenever it senses a fault or power surge, which prevents the return current from damaging the distribution board.

Hot surface burners are usually connected to 15 amp range circuit breakers; therefore, before you work on them, you must first turn off the breaker.

How to Replace a Faulty Component on a Samsung Stove?

Replacing a faulty sensor may not be a problem. The difficulty is identifying the breaker to which the hot surface burners are connected.

Especially if you’re working alone, moving to and fro to check which appliance goes off with the breaker can be exhausting.

And also, single-handedly tracing the wires connecting the surface indicator light and the burners is another task.

However, if you’re confident you can do all of it by yourself, here is a quick guide on checking and rectifying faults on hot surface burners.

While it is good to carry out some repairs around the house just for the experience, involving an electrician will make the work faster and keep you safe from the risk of electrocution.

Since they’re trained and have years of experience in the field, they can easily tell what component is faulty without wasting time.

The only time advisable for you to fix electrical faults in the house is when it does not put you in harm’s way.

Replacing sensors and changing the control switch to hot surface burners is considered safe enough for a layperson to handle with the right tools.

Experiencing faults in our appliances is a common experience for many households. It could be a power surge or leaking earthing system, but no matter how careful, having these faults is inevitable.

Some of the faults are beyond what we know and can handle, while others, like a faulty switch, are minor issues that only require you to have the right tools.